The Demonstration Phase for The Boise Commons is underway.

With the cooperation of the Boise School District, The Boise Commons surveyed more than 1,300 high school seniors in October 2016 regarding their views on voting and civic participation. The results will provide the community with insight that may help inform the improvement of civic engagement, civic education, and perhaps even governance for the next generation. The report can be found in the Exhibit Hall.

Designing a Framework for Collaboration Among Neighborhood Associations

Following up on the State of the Boise Neighborhood Associations survey (see below), The Boise Commons organized two summits (November 2016 and February 2017) to help neighborhood association representatives begin designing a framework for more effective collaboration between associations. 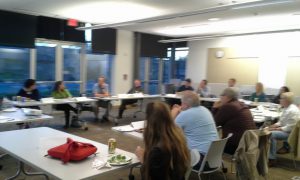 This project was intended to produce the first clear picture of the strengths, needs, and scope of interest of Boise’s officially recognized neighborhood associations, based on the perspectives of those active with the associations and the larger communities that they serve. That picture can help identify areas of opportunity for enhancing the associations’ ability to serve neighborhoods. The final survey report can be downloaded in the Exhibit Hall.

Complementing this survey was the Boise Residents Neighborhood Engagement Survey, intended to help the community gain a better understanding of how residents understand, value, and view neighborhood-level organization, including their own neighborhoods’ associations.

Finding Leverage in the Mess: Workshops on Dealing with Complexity in Public Issues

These experiential workshops, which began in the spring of 2017, will introduce participants to the use of structured democratic dialogue and the mapping of influence among the different factors contributing to a complex public issue, in order to help gain a deeper and more powerful understanding of that issue and a head start on addressing it. The first workshop focused on dependence on the automobile in the Treasure Valley.

The Neighborhood Game is a kind of scavenger hunt through which players have fun learning about their neighborhood and meeting new people. We first introduced the game in October 2014. Some examples of what people did are posted on the game’s Facebook page, https://www.facebook.com/TheNeighborhoodGameBoise.

It’s a very rewarding way to spend a few hours in your neighborhood.

The Empty Chair campaign is simple: we ask any local organization, agency, or corporation whose discussions have implications for future generations to set aside an empty chair in their meeting space, and to place upon that chair a placard (which we provide) stating: This empty chair represents future generations who are affected by what we say and do here today. The Empty Chair is a simple reminder to consider things in the long-term.

Study of the Disparity in Voter Turnout in a Local Election

The Boise Commons conducted a short “lightning study” of the geographic disparity in voter turnout following the city election of November 7, 2017. The report from this study can be found in the Exhibit Hall.

This important project will focus on surfacing the assumptions that are implicit (unexamined) in our social systems and institutions, such as education, health care, the economy, government, and justice. The first forums to kick off AssumptionScope will be held in late 2019/early 2020.

This is a simple tool and activity that we designed to help promote a “systems view” – an appreciation of the interconnected nature of issues and solutions. The prototype is shown below. We are hoping to introduce this to area schools in the near future.

Thomas Jefferson expressed the view that the U.S. Constitution should be re-written by each new generation. His rationale was that this would allow each generation to truly understand what it means to create such a document, and to take ownership of it rather than merely revere what others had created. Jefferson’s argument did not gain traction, but the idea of engaging new generations in thinking through how they would author a Constitution, or at least parts of it, is compelling from a civic educational standpoint.

The Mock Constitutional Convention is an event that we are hoping to organize among Boise area students.

Consider.it is an online platform that supports civil, high-quality discussion about choices facing a community. It was developed and first put to use in Seattle, and we’ve been piloting its use in Idaho. https://boisecommons.consider.it/ and you can see what others have posted so far. It is easy to register to participate and add your point of view.